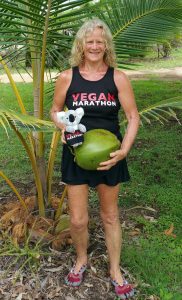 Janette Murray-Wakelin ate a vegetarian diet for decades and was vegan for 15 years.

Living a healthful lifestyle, she was shocked to discover she had breast cancer that spread to her chest and lymph nodes and was given six months to live, 12 months with chemo and radiation.

But Janette believed chemo and radiation would harm her body instead of helping it heal so against her doctors orders, she went RAW vegan.

Over 20 years later, Janette still proves she was right!

April 9th, 2020 note:  Janette and Alan would be on their walking trip right now, but due to their flights being cancelled they are still at home in Australia (also in lockdown).   They are hoping to reschedule for July-Oct or April-July next year depending on how things pan out.

You can learn more about Janette, how she beat cancer, her books, movie and much more by visiting RawVeganPath.com.